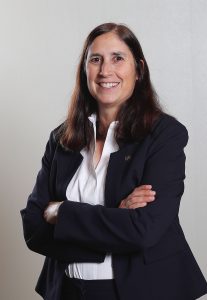 Leslie Buchanan is an English teacher at West Vancouver Secondary School in West Vancouver, Canada. Over the past thirty years, Leslie has taught at two schools, in six different departments and in over 25 different teaching spaces.  She started her English Literature degree at the University of Victoria but transferred in third year to the University of British Columbia. Leslie ran cross country and track and field at both universities.

She currently enjoys coaching the high school cross country and track and field teams but in her over 35 years of coaching, has coached a variety of other sports including basketball and field hockey. She chairs many committees including the BC High School Parathletes Track and Field Inclusion Committee.

Leslie has been involved with triathlon since the mid-1980s. She volunteered with the International Triathlon Union (now World Triathlon) putting on races, doing administrative tasks and officiating throughout the 1990s. Highlights during this time were helping to create the first Triathlon Competition Rulebook and lobbying International Olympic Committee members during the 1992 Barcelona Summer Olympics for triathlon’s inclusion into the Olympic Games. After officiating at the Sydney Olympic Games as the Chief Technology Official, Leslie was named ITU’s Technical Director. This allowed her to teach part-time and be seconded to ITU part-time. She held that position until 2008, when she became ITU’s Anti-doping Director. Leslie was a member of the Tokyo 2020 Olympic Games Anti-doping Expert Taskforce. At the end of 2020, Leslie stepped down from her triathlon staff role and was elected to the World Triathlon Executive Board which allowed her to return to the classroom full time for the 2021-2022 school year.

Leslie enjoys officiating at triathlons and facilitating technical official’s courses because she gets to use her skills as an educator. She knows that her triathlon activities help her in her classroom as she can bring many real-life experiences into her classroom.

Leslie holds a Master’s degree from San Diego State University and two Bachelor degrees from the University of British Columbia.

My most memorable experience in my Faculty of Education at UBC was during a Communications class. All of us were in a large space where there was a guest speaker who asked for volunteers to participate in a demonstration. I was chosen from one side of the room and one of my good friends was chosen from the other side of the room. I am sure the lecturer did not know that we knew each other very well. He asked us to line up on opposite sides of the stage, walk towards each other and not stop until we were told to. We obediently did what he asked and ended up walking into each other and one of us ended up on the ground as we were knocked off our feet by the force. The speaker said it was the first time that the two volunteers did not stop even though we had not been told to. We really messed up his lecture. I am not sure what his point was going to be but I learned that lessons do not always work out as planned, students do not always behave in the way that you expect and one should always have a plan b when things go in a different direction. Some of the best unexpected outcomes are the best teachable moments.

I have been so fortunate to able to work in the school district where I grew up. School District 45 (West Vancouver) has been very supportive of my other passions, including working in the sport of triathlon. For the past twenty years, I have been seconded part-time to World Triathlon, the governing body for triathlon and multi-sports world-wide. My education background has allowed me to combine my triathlon duties with my interest in educating others, specifically with writing value based curriculum on anti-doping within triathlon and previously sitting on the World Anti-doping Agency’s (WADA) Education Committee. In addition, I have been able to facilitate technical official’s courses to potential international technical officials around the world, including conducting courses in Mexico City, Kuala Lumpur, Tokyo, and Lausanne. Of course, right now we are doing a lot of online learning and I first learned about how best to do that at UBC.

As a coach and a teacher, I have been able to include students who are not always integrated into a regular classroom setting. This has been a cause of huge satisfaction for me and I hope that it has been a source of enjoyment for those students as well. My greatest success of inclusion was when I worked with other passionate educators to make sure that parathletes were included in the provincial championships for track and field and cross country.

Outside of work, I have been able to advocate for women to be included at all levels of sport, including as athletes, officials and administrators. I have also been outspoken for women to earn equal prize money and qualification spots at major Games like the Olympics. I have had the honour to be the co-Technical Delegate for the Olympics Games Triathlon in London in 2012, and Referee at the Olympics in Athens in 2004 and at paratriathlon’s debut at the Paralympics in Rio 2016. I could not have had those experiences without being involved in a sporting environment that values women.  Some sports do not always welcome women but I have been fortunate to align myself with one that does. This attitude is integrated into all aspects of my life.

For recent graduates, I would congratulate you in choosing an exhausting but rewarding career. There is a wealth of knowledge behind those closed doors down the hall from your classroom so do not be afraid to ask for help from a more experienced teacher. You are not alone and do not have to do everything yourself. Be a lifelong learner and continue to look for better ways of educating yourself and your students. Teach for at least five years before you attempt your master’s degree so you can delve into a topic that really interests you and that will improve your teaching.

Stay in contact with your cohort from UBC Education. You will lean on them more than you would expect over the next few years. My friends and I had a first paycheque dinner after all major holidays where we would meet for dinner after we received our first paycheque.  We all taught in different districts so it was nice to put aside some time to talk about what was happening in our different schools. The server got to choose the credit card that would pay for everyone’s meal. You don’t have to do that but it is good to get together and discuss your experiences on a regular basis in the first few years. We found that it really helped to share our experiences with others and get advice about what was working and what was not.

For current students, I would say I hope that I get to be your teacher mentor. Ask questions of your peers, professors and mentor teachers. I would encourage you to volunteer in schools and youth activities to find out what age group you really enjoy working with. Take advantage of going into as many classrooms as you can during your practicums as it may be one of the final times that you can see other people teach.