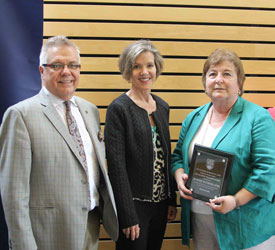 After graduating from UBC’s Faculty of Education in 1969, Ms. Bonnie Sutherland taught a variety of grades and subjects ranging from elementary to secondary, from Physical education to Math to English. She introduced the Advanced Placement program in the Delta BC School District, taught AP courses and coached field hockey for 15 years before retiring in 2003.

However, Sutherland’s passion for education extends far beyond the traditional classroom.

Filling a resource gap from Delta, BC
to Victoria Falls, Zimbabwe 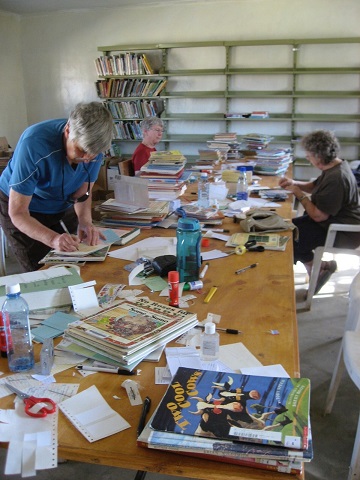 Stemming from a 1992 visit to a small school being built in Victoria Falls, Zimbabwe, Sutherland and her husband, Donald Sutherland (also a UBC grad: BEd (Elem)’81, now deceased) were struck by the few and very dated books.

“The school had one small, pathetic shelf of books, the newest published in the early ’60’s. We had access to books, and said, ‘No promises,’ but we would try to do what we could,” says Sutherland.

Thus was born the Afretech Aid Society. The non-profit’s goal was, and remains, to fill the resource vacuum that exists in impoverished schools and communities and, through training and general support, effect a shift from strictly rote learning to a model that includes critical thinking.

“The first pallet of books took a year to get there,” says Sutherland, “but those resources made such a difference. My husband used to say, ‘Education may not be the answer, but without it there is no answer.’”

Each year, Afretech sends about 30,000 books to Ghana, Kenya, South Africa, Tanzania and Zimbabwe. Since the organization began in 1992, it has expanded to Asia and supports libraries in BC.

Supporting First Nations libraries in BC

In 2012, Sutherland’s Afretech team worked on a library for the First Nations’ Community in River Inlet. This led to a core of team members playing a key role in this on-going and expanding WRITETOREAD project, an initiative of Government House, to improve literacy in remote aboriginal communities.

Afretech volunteers have played a key role in collecting books tailored to the needs of each community, obtaining suitable resources, sorting, and processing, then helping install the libraries and train where necessary. WRITETOREAD has installed libraries in several First Nations communities including Halalt, Wiikinux, Yunesetin, Chemainus, Old Masset, Toosey, and Fort Rupert, and the Ditidaht community library on Vancouver Island.

When asked if Afretech has achieved its goal, Sutherland says, “Not yet, but with ARES we just might. At the moment we are on the cusp…there is such potential.”

ARES “Library in a Box”

The ARES Sutherland refers to is the product of her new venture, ARES Education Solutions. ARES is a small, rugged, shoe-box-sized server and battery designed for schools without libraries, labs or textbooks. A wi-fi enabled, independent unit, ARES is preloaded with Wikipedia, Khan Academy videos, TedTalks, literature and other educational resources. Essentially a “Library in a Box,” it can withstand arid, dusty conditions and power surges.

ARES has been installed in about 24 schools in Africa. 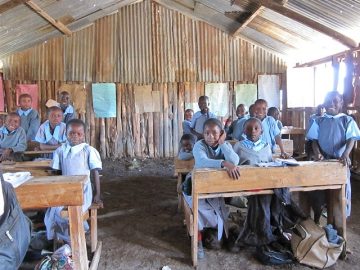 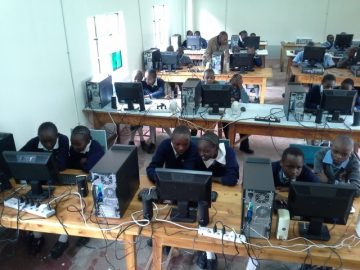 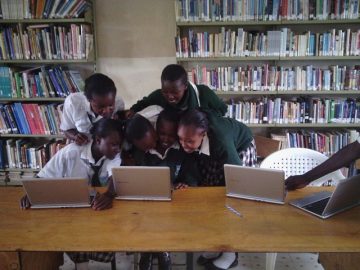 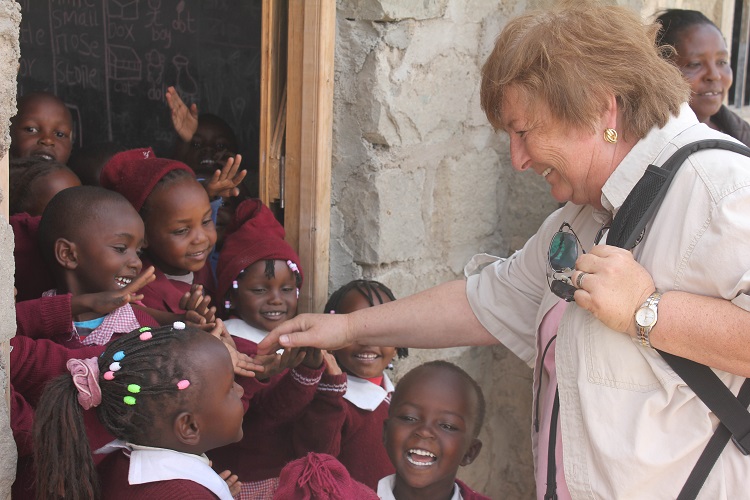 Thome Boys, a remote public school in the bush, had very limited resources until Afretech installed a library and computer lab with ARES in February, 2016.  When students wrote the national school exit exam in November, 2016, Thome came first in the district and thirtieth in the country out of 2600 schools, ahead of many prestigious, expensive private schools.

At Sweetwaters Primary, a simple bush school with classroom walls made from pieces of sticks, Afretech installed a library of 3000 books in January 2016 after purchasing shelving and arranging to have a cement floor poured. Sutherland returned in February 2017 to check on things.

“The school was very proud. Somehow they had managed to provide some furniture for the library, and three classes were scheduled into the library every day. Things started slowly with many children looking at the pictures and just reading the captions underneath, but gradually their reading expanded and has had a profound effect,” says Sutherland.

She explains that students in Standard 8 also write a national exam, but more than half across the country fail, and, “that is basically the end of their schooling, thereby assuring a life of poverty.”

However, this is not the case for the Sweetwaters kids.

“Every single student passed, and for the first time ever, some with scores over 300. Every student received a placement in a good high school. The average mark went up 45 points. This is unheard of,” says Sutherland. “Good resources and a teaching staff willing to try equals success!”

Sutherland notes, “I am passionate about what we do to change lives and have fought so may fights. This award validates everything Afretech has done and provides an opportunity to think about what we might be able to do with ARES in the future. And the award has increased my determination to move forward.”

The UBC Alumni Teacher Award highlights the significant impact UBC education graduates have had, and continue to have, on teaching and learning in schools throughout the province and beyond. The award comes with a $1000 honorarium for the recipient and $1000 honorarium to the non-profit organization of their choice. Ms. Sutherland contributes both to Afretech Aid.