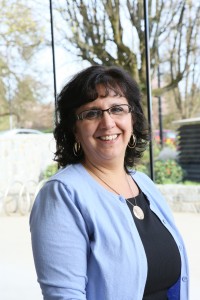 An alumna of the Native Indian Teacher Education Program (NITEP) class of 1980, Cheryl Sebastian has since passed a remarkable 33-year educational career as a classroom teacher and both a school and district principal. Throughout the course of her career, Cheryl has made significant contributions to the development of Aboriginal Education in B.C., with a particular focus on increasing Aboriginal student success and ensuring that all students learn more about Aboriginal culture and history.

Cheryl Sebastian is a member of the Gitxsan Nation, Fireweed (Giskaast) Clan, in the House of Gitluudahl. Originally from Hazelton, B.C., Cheryl graduated from high school in 1976 and subsequently enrolled in UBC’s newly-established Native Indian Teacher Education Program (NITEP). She completed the first two years of her elementary program at the NITEP satellite center in Terrace before moving with her husband and young son to UBC to complete her BEd in 1980.

Upon graduating from UBC, Cheryl taught for seventeen years at several First Nations schools and School District #82 (formerly School District #88) in northern British Columbia. During this time, she demonstrated an extraordinary ability to juggle family, work, and educational priorities. In 1985, she gave birth to her daughter, and in 1992, completed a Diploma in Library Education from UBC while continuing to work full-time.

In 1997, Cheryl moved into education administration, and accepted a position as the Coast Mountain School District’s vice principal in student support services. She then worked as principal of two elementary schools in order to gain in-school administration experience. Her roles in both school and district administrative positions prepared Cheryl for an important leadership role as the Director of Instruction for Aboriginal Education in the Coast Mountain School District (S.D. #82), a role in which she is described as having been “an education trail blazer.” According to Nancy Wells, Cheryl’s former colleague and the District’s Superintendent of Schools:

“Under [Cheryl’s] leadership the Aboriginal Education Department developed a strong identity and mission for improving the success rate of Aboriginal learners, and influenced schools in the district to create more welcoming and culturally sensitive learning environments.”

Recently, Cheryl moved to Kamloops in order to be closer to her children, and accepted her current position as the District Principal of Aboriginal Education for School District #73 Kamloops/Thompson.

In addition to her formal roles as an elementary teacher and a school/district leader, Cheryl has also taught courses for UNBC, where she obtained a Master’s Degree in Educational Counselling in 2000. Furthermore, she has remained engaged with several provincial organizations such as the First Nations Education Steering Committee and the Ministry of Education.

The First Peoples’ Cultural Council estimates that only 5.1% of the B.C. First Nations population are fluent speakers of their language. Each language encompasses immense cultural, historical, scientific, and ecological knowledge, and the loss of any First Nations language would be a loss for all. Among Cheryl’s many accomplishments in collaboration with Aboriginal community organizations is her role in establishing the Integrated Resource Plan for the Gitxsan language, which is currently being approved by the Ministry of Education.

Thanks to her work alongside elders and linguists, students in Cheryl’s home community of Hazelton will soon be able to receive credit for learning their native Gitxsan language as part of their regular school program. This accomplishment speaks to Cheryl’s dedication to developing Indigenous pedagogy, as well as her effective collaboration with First Nations bands and community organizations to preserve the wealth of cultural knowledge found in the Gitxan language.

Cheryl’s successful educational career, along with her contributions to Aboriginal education in B.C., exemplifies the goals set out by NITEP to support Aboriginal success in education. On the 40th anniversary of NITEP, we are pleased to recognize Cheryl’s accomplishments with the UBC Alumni Teacher Award.