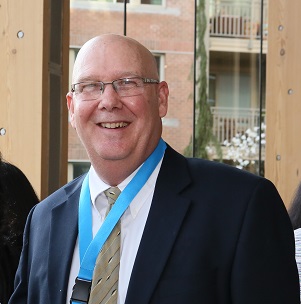 Scott Ormiston joined the Aboriginal Education Department in the Maple Ridge-Pitt Meadows School District just two years ago, and since that time, has directly contributed to a significant increase in Aboriginal student success. Aboriginal graduation rates in the Maple Ridge-Pitt Meadows School District have increased by nearly 20%, and are projected to soon become the top in British Columbia. Scott’s 31 years of experience in teaching and coordinating secondary school special needs programs, as well as his innovative use of a “case management” model, have directly contributed to his striking accomplishments as an Aboriginal Resource Instructor.

Scott’s influence as a teacher cannot be fully expressed through figures. Throughout his career, the relationships that Scott has built with his students have been at the core of his teaching practice. He is described as having a remarkable ability to generate mutual respect with his students, and to both advocate on their behalf as well as encourage them to advocate for themselves. Furthermore, on two separate occasions he has adopted children from young student mothers who found themselves unexpectedly pregnant; raising these children with his wife attests to the depth and strength of Scott’s relationships with his students. During his time at Garibaldi Secondary, where Scott taught between 1994 and 2012, he established several traditions that served to improve cohesiveness and pride within the school. Examples include a Terry Fox Run, staff appreciation lunches for students working with special needs students, and an annual Christmas party. First Nations 12 students at Garibaldi traditionally give paddles to teachers that have made a significant impact on their lives; over the course of his years at the school Scott was a paddle recipient time and time again.

In addition to his role as an instructor with the formal education system, Scott has taken on several mentorship positions within the broader community. He consistently mentors student teachers within the district, and is an excellent role model towards his younger colleagues. For the past 43 years he has volunteered as a rugby, soccer, and swim coach at both the school and community levels. He has worked extensively with the Canadian Red Cross national water safety programs to co-author the Canadian Red Cross’ “1-2-3 Breathe” manual and video, which has since been incorporated into a revised national Learn to Swim program. The introduction of the “1-2-3 Breathe” concept has corrected a previously high failure rate of the Red Cross’ Learn to Swim program, and is correlated with an overall statistical decline in drowning rates within Canada. Scott’s multiple engagements, and his demonstrable success in all that he undertakes, speak to both his passion and skill for teaching in all its forms.

For Scott’s indefatigable commitment to teaching, and the passion, kindness, and caring he brings to his practice, the Faculty of Education is pleased to recognize him with the 2014 UBC Alumni Teaching Award.