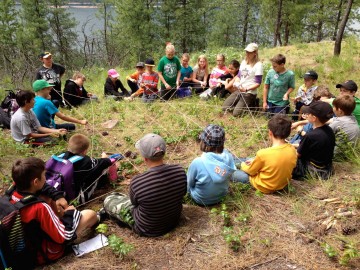 Even before becoming a teacher, Monica Nissen has been devoting her life to environmental education. After completing a Bachelor of Arts in the early 90s, Monica spent several years working as a park interpreter. Based in the Kokanee Creek Provincial Park just north of Nelson, Monica researched, developed, and conducted education programs for visitors to national, provincial, and municipal parks and conservation areas.

In 1999, Monica returned to school and in a year’s time graduated with a Bachelor of Education from UBC’s West Kootenay Teacher Education Program. Since graduating, Monica has dedicated herself to educating elementary-school students on the environment and environmental issues. Her position as a Teacher Teaching on Call has allowed Monica to participate in conducting a number of environmental-education programs including the several years she spent as an Outward Bound instructor.

In 2005, Monica took her commitment to environmental education province-wide. Initially hired as an Environmental Educator by Wildsight— an organization that advocates for the protection of biodiversity and healthy human communities in Canada’s Columbia and Rocky Mountains ecoregion— Monica eventually assumed the role of program manager. Monica is also a community educator for the Columbia Basin Environmental Education Network, in which she works on the Wild Voices for Kids program. In these numerous capacities, Monica develops educational curriculum and has personally engaged a majority of the students from both the East and West Kootenays through in-school and community-wide environmental education initiatives.

Monica Nissen’s work exemplifies what it means for education to go beyond the classroom.