Education about and for the Amazon rainforest and Indigenous rights 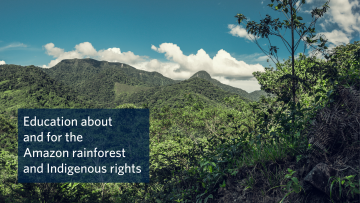 “The fight against the climate crisis—which is also the fight against human extinction—depends on the protection of Indigenous peoples’ rights. We are the front lines of protecting the Amazon forest and many other sensitive areas in Brazil and around the world. Now is the time to act for our human and other-than-human relations, and for our collective future.” Chief Ninawa Huni Kui.

The Amazon holds a unique place within the living fabric of the Earth. Its significance to the climate emergency and the wider extinction crisis is attested by science, while its role in the cultural imagination of environmental movements is unparalleled. An educational campaign about the importance of, as well as threats to, the Amazon rainforest and Indigenous rights in Brazil was launched last summer. The Last Warning educational initiative is an extension of a long-term research collaboration between the Huni Kui Indigenous People’s Federation in the Amazon and researchers from the Department of Educational Studies, including Dr. Vanessa Andreotti, Dr. Cash Ahenakew and Dr. Sharon Stein.

One of the flagships of the educational campaign is the children’s book “A forest called Amazon” authored by Chief Ninawa Huni Kui and produced with the support of the Gesturing Towards Decolonial Futures arts/research collective at UBC. The book is available to download for free. Another educational resource available is the “Pledge of Generations“, which invites new commitments across generations to face global challenges with deeper levels of responsibility. A knowledge mobilization video with 15 Canada Research Chairs in related areas has also been collaboratively created to highlight the importance of the Amazon region for the regulation of global water cycles and carbon filtration and the urgency of making Indigenous rights central to the climate agenda. The video and a featured article emphasize that more deforestation will push the Amazon beyond a tipping point, turning it from a rainforest into a savanna. The Amazon will go from being a vital carbon sink that helps us slow down climate change to a dangerous carbon source that will accelerate the heating of the planet.

The British Columbia Teachers’ Federation (BCTF) has issued a formal letter in support of the Huni Kui Federation and this educational initiative. Teri Mooring, BCTF’s president, stated “As teachers, we are guided by an ethical responsibility to protect the future of the planet and of future generations, both human and non-human. The climate crisis threatens the planet, and its effects are being increasingly seen across our countries. The Amazon plays a vital role in helping to slow down climate change and must be protected from exploitation.”

Additional educational resources are currently being developed for the next phase of this initiative, which will be launched during an extended visit of Chief Ninawa Huni Kui to UBC in 2022.