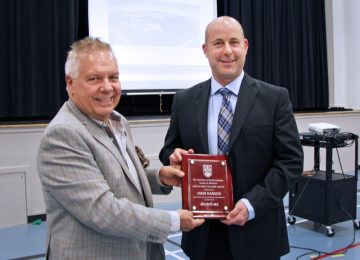 Kamara, a mother of two and a refugee claimant, came to Burnaby in 2015 from Sierra Leone after some years in the U.S.

She said the support she found at Edmonds was like nothing she’d ever experienced before – and Nanson has been a central part of that.

“When I have a problem, instead of phoning my people in Africa, the first place I come is to my kids’ school,” she said. “Even if I have a headache, if I’m not able to call John, I will text John … John is a family member for me.”

Kamara was one of several people at the school that nominated Nanson for a prestigious alumni award from UBC’s education faculty.

The award recognizes “outstanding achievement by alumni who are making exceptional impacts in the lives of their students and learning communities,” according to the university’s website.

Nanson is this year’s winner.

After graduating from UBC education in 2002, Nanson hasn’t exactly followed a traditional career trajectory as a teacher.

Instead of getting onto a teacher-on-call list in the city and waiting around for a shot at a full-time teaching job, he accepted his first position in Pukatawagan, Manitoba, a remote Cree First Nation community more than 700 kilometres north of Winnipeg.

“I learned a lot, a lot of trial and error and a lot of learning about community,” he said.

During his three years there, he was instrumental in setting up an adult education program aimed at getting young parents and adults back into the school system.

From Pukatawagan, Nanson came to Burnaby to work as a special education teacher, eventually becoming the learning support services department head at Burnaby Central Secondary for eight years before accepting a position at SFU as a faculty associate working with the university’s student teachers for three years.

In that role he got a chance to see first-hand what community schools in Burnaby were all about.