Land Acknowledgements – Why do we do them? 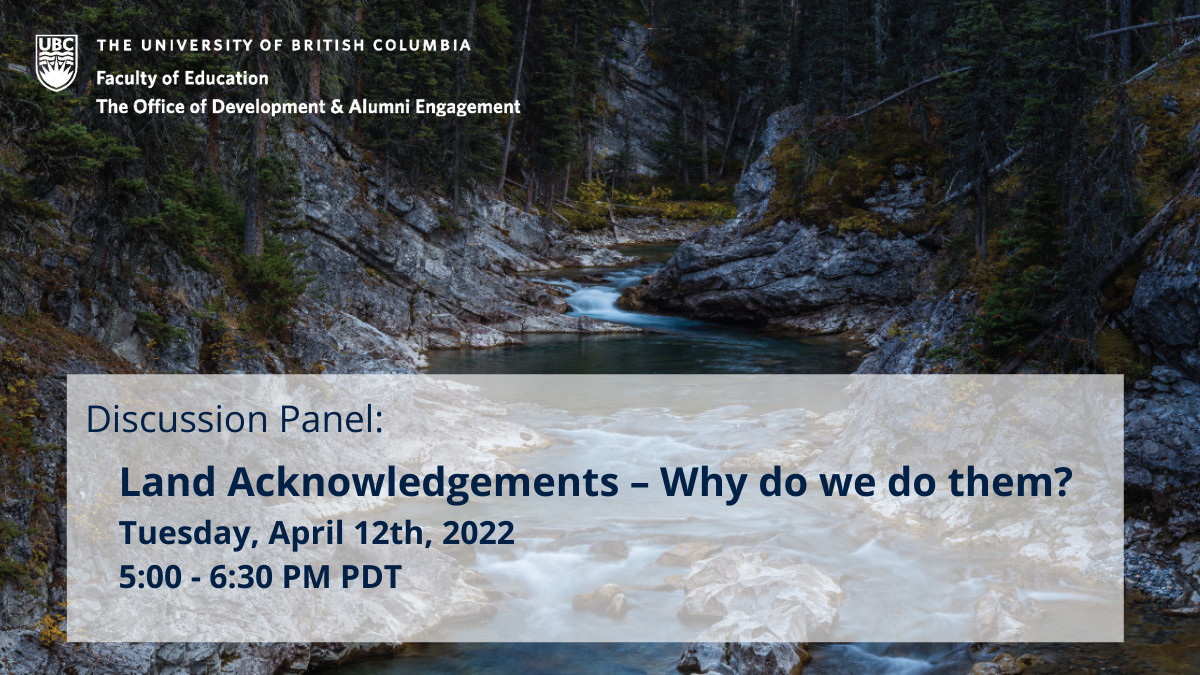 Thank you for joining us at the Discussion Panel!

We hope you enjoyed the event. Please see below for a recording.

Although it’s now the norm to begin speeches and events with land acknowledgements, not everyone may understand the significance of these formalities. Interested in learning more? At this inclusive and bridge-building webinar, everyone is invited to deepen their understanding by listening to panelists from different Indigenous nations/bands who will discuss the purpose and meaning of these important customary statements. Have something you’re wondering about? Bring your questions — a short Q&A session will also be held. 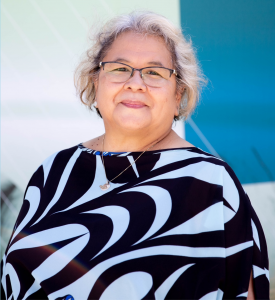 Carleen Thomas is an educator and former council member for the Tsleil-Waututh Nation. She was appointed Chancellor of Emily Carr University on August 3, 2021.

Ms. Thomas holds a bachelor’s degree in education from UBC and has previously worked for the North Vancouver and Burnaby school districts as a district resource teacher in Indigenous education. She also sat on the Burnaby School District’s Aboriginal Advisory Committee and served as the Aboriginal Representative Chair in the Capilano University Senate.

She currently sits on the Indigenous Advisory and Monitoring Committee, a federal advisory committee made up of 13 Indigenous and six senior federal representatives that provides advice to regulators and monitors the Trans Mountain Expansion project and existing pipeline. 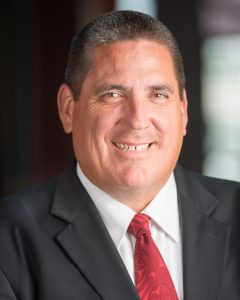 Associate Superintendent of Indigenous Education, BC Ministry of Education

Brad has been an educator for 26 years in the North Vancouver School District. For the last 8 years his position has been District Principal with the portfolios of Indigenous Education and Safe Schools.   He is also an Adjunct Professor at UBC within the Faculty of Education.  He started a new position in December 2021, with BC’s Ministry of Education, as the Associate Superintendent for Indigenous Education.

Brad was recently selected to the Governor-General of Canada’s Leadership Conference.  He was 1 of 250 leaders from across Canada that came together to develop strategies on how to move Canada forward in the next 150 years.  Brad was the recipient of the Indspire Guiding the Journey National Award for Leadership in Indigenous Education.  Brad is currently a Candidate in the Doctor of Education program at the University of British Columbia. Brad has had the opportunity to enhance the awareness and the values of Indigenous Education that lead to dialogue through his presentations across Canada and the United States.  One of Brad’s mottos is for all of us to understand “Truth Before Reconciliation” and to “Go Forward With Courage.”    During the conversation with Brad, you will be able to gain an understanding of the importance of Indigenous knowledge and Indigenous ways of knowing within your own practice and as a member of society.

Marny is from the Musqueam band, of the Coast Salish people. Marny would also like to acknowledge UBC resides on the traditional and unceded territory of the Musqueam people.

Marny has completed both her degrees: a Bachelor of Education & Masters of Educational Technology and is currently working on her Ph.D. in LLED at UBC. Marny has been the Program Coordinator and is an Instructor in the NITEP On-Campus center, teaching the introductory Indigenous education courses. She is an active member of the UBC/MIB Language Committee and was the First Nations and Endangered Languages Program (FNEL) Instructor, teaching the intermediate level of the Coast Salish traditional Musqueam language course, hən̓q̓əmin̓əm̓ from 2002 until 2019. She understands how the connection to Indigenous languages; gives value, honour and a sense of identity, which cements Native Indigenous, people in place and culture.

Marny comes from a long line of fisher-people, and she too is an avid fisherwoman – owning and operating her own gillnetter. As her dad and grandfather always did, she harvests sockeye salmon from the Fraser River every summer, in this cultural activity, she is able to share those same teachings on to her own children, connecting them to their traditional language & ways of her people.

Marny is actively involved in the education of the Aboriginal youth – she has taught in the elementary grades, been a liaison for her community and neighbouring schools and sits on many committees to ensure the betterment of Indigenous education.