National Day for Truth and Reconciliation

September 30th is the National Day for Truth and Reconciliation 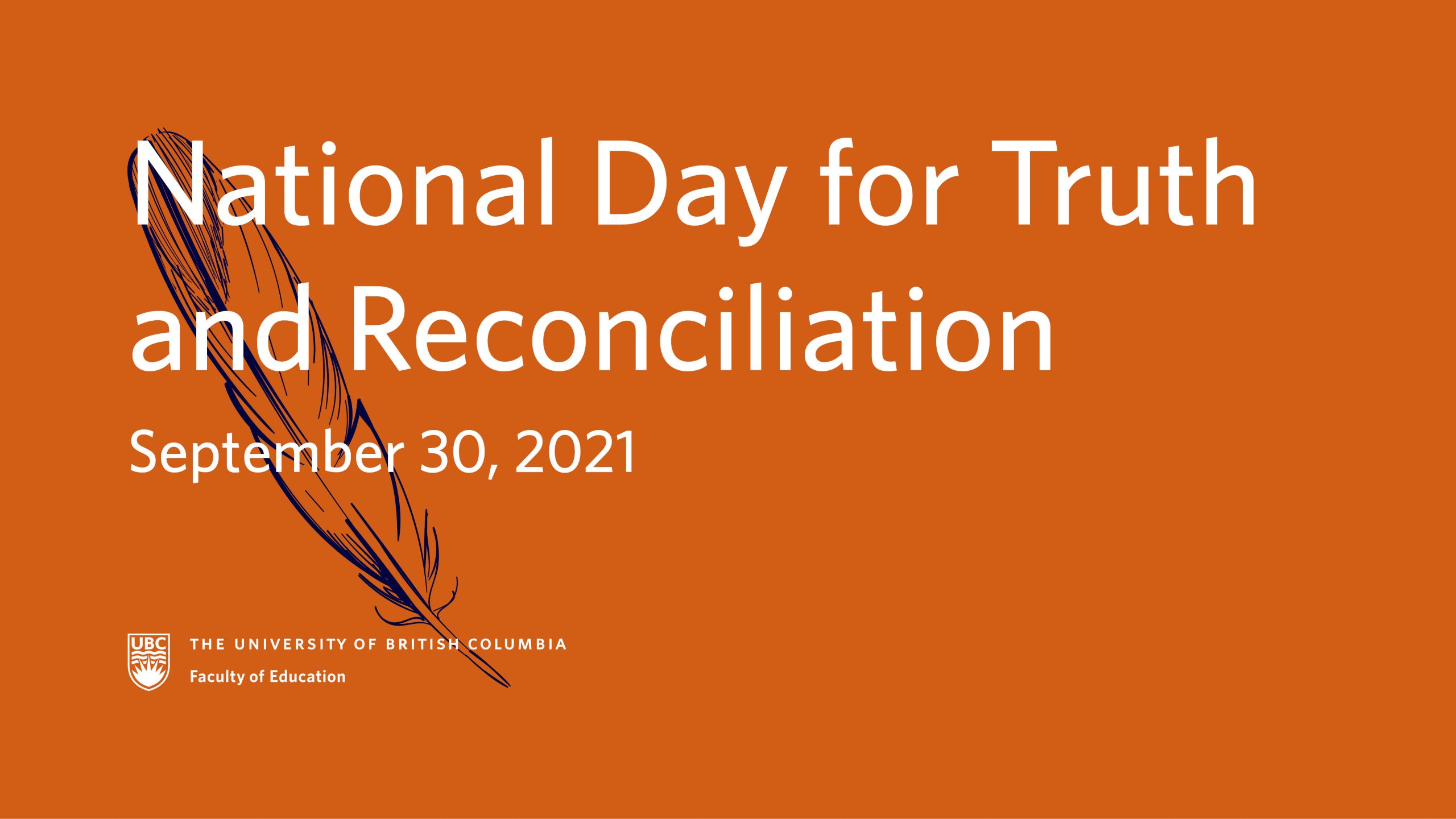 UBC Faculty of Education is situated within the traditional, ancestral, and unceded territory of the xʷməθkʷəy̓əm (Musqueam) and Syilx (Okanagan) peoples. These lands and places are steeped in histories and knowledges of the original peoples of these territories.

Orange Shirt Day, also known as the National Day for Truth and Reconciliation, signals us to learn and reflect upon the Indian residential school system and the impact it continues to have on Indigenous communities.

Orange Shirt Day was elevated to a statutory day of observance in 2021, in light of the revelations of thousands of unmarked graves near former residential school sites across the country.

Commemorate Orange Shirt Day by coming together in a spirit of reconciliation and hope—because every child matters.

The date of September 30 was chosen as the National Day for Truth and Reconciliation because it was the time of year when Indigenous children were removed from their families and forced to attend residential schools.

Learn more about the Faculty of Education’s commitments to Truth and Reconciliation and to Indigenous Education.

How can we honour the National Day for Truth and Reconciliation?

The NCTR educates Canadians on the profound injustices inflicted on First Nations, Inuit and the Métis Nation by the forced removal of children to attend residential schools and the widespread abuse suffered in those schools.

The NCTR preserves the record of these human rights abuses and promotes continued research and learning on the legacy of residential schools. Their goal is to honour Survivors and to foster reconciliation and healing on the foundation of truth-telling.

The NCTR was gifted the spirit name bezhig miigwan, which, in Anishinaabemowin, the language of the Anishinaabe people, means “one feather.” The name reminds us that every Survivor needs the same respect and attention that an eagle feather deserves. The name also teaches us that we are vital to the work of reconciliation.

To learn more, visit NCTR’s website.
Significant Reports
Visit the National Centre for Truth and Reconciliation’s reports webpage to read:
TRC: Calls to Action
To redress the legacy of residential schools and advance reconciliation, in its final report the Truth and Reconciliation Commission of Canada (TRC) called on governments, educational and religious institutions, civil society groups and all Canadians to take action on the 94 Calls to Action it identified.

The IRSHDC works with partners across various disciplines at UBC and beyond to facilitate dialogues and access to records and information that support engaging the legacies of the residential school system and the ongoing impacts of colonialism in Canada. By supporting Indigenous peoples’ self-determination and working in partnership with partners and communities, the IRSHDC supports teaching and learning at UBC and UBC’s Indigenous Strategic Plan.

Through digital teaching and learning contexts, they explored this land-based experiential learning opportunity, engaged in traditional Indigenous storytelling practices, and situated the projected within the principles of:

Listen to the podcasts here.

Indigenous Curriculum Enhancement Project Gallery
In partnership with the Teacher Education Office, the Office of Indigenous Education is pleased to present a gallery of curriculum projects that aim to enrich the curriculum of teacher education and graduate education with Indigenous perspectives, knowledges, pedagogies, and experiences.

These projects focus on one or more of the following goals:

Funding to support these projects was provided by the Ministry of Advanced Education, Skills, and Training.

The display will include picture books, novels and graphic novels that address the history of residential schools in Canada, as well as teacher resources to support Truth and Reconciliation in K-12 schools.

The Education Library has a number of materials available year round to support teaching and learning about Residential School History and Truth and Reconciliation, many of which can be found on their booklists: blogs.ubc.ca/educationlibrarybooklists/indigenous-literature-and-education
Intergenerational March for Orange Shirt Day
On September 30th, 2021 at 12 pm, meet outside the Indian Residential School History and Dialogue Centre for a xʷməθkʷəy̓əm (Musqueam) welcome, bannock and tea.

The march will follow a marked pathway along Main Mall to the Reconciliation Pole where an Elder and Survivor will address attendees.

The pathway will be lined with informative placards and volunteers will speak about the history of residential schools.

The march will conclude at the Engineering cairn, where Elders and children will be invited to add handprints or messages to the painted cairn.

All members of the UBC community are welcome.

The Faculty of Education is honoured to host two groundbreaking exhibits on the residential school system. The exhibits are presented in partnership with UBC Library and on display at the Irving K. Barber Learning Centre. The Faculty acknowledges the generosity of the Legacy of Hope Foundation, creator of the exhibits.

For more information on the exhibits, visit the event page. The Legacy Of Hope Foundation is a national Indigenous charitable organization with the mandate to educate and create awareness and understanding about the residential school system, including intergenerational impacts, such as the removal of generations of Indigenous children from their families, including the Sixties Scoop, and the post-traumatic stress disorders that many First Nations, Inuit, and Métis continue to experience. The Foundation also works to address racism, foster empathy and understanding, and inspire action to improve the situation of Indigenous peoples today.
The Orange Shirt Project
September 28, October 5, and October 12
12:00 – 3:00 pm
Scarfe 1107

All teacher candidates and Faculty of Education faculty and staff are invited to participate in creating orange shirts to commemorate each of the Indigenous children who lost their lives at Indian Residential Schools. The collected contributions will be installed in Scarfe as an ongoing act of remembrance and reconciling.

Join us in a knitting or crocheting workshop, offered by Dr. Lorrie Miller, Dr. Kerry Renwick, Dr. Shannon Leddy and Heather Clark. New and seasoned knitters and crochet enthusiasts are all welcome. Patterns, directions and materials will be available. Donations can be dropped off in the Teacher Education Office.

For more information, visit the event page.
Film Screening and Discussion
As part of a 2021 campaign to commemorate the National Day for Truth and Reconciliation (Orange Shirt Day), the Indian Residential School History and Dialogue Centre and partners would like to invite you and members of your units, departments and faculties to two very special film screening and discussion events:

Please note that registration is required for both events and proof of vaccination will be required for all guests attending the event taking place at the Chan Centre for the Performing Arts.

For more information, visit the event and registration page or email irshdc.events@ubc.ca.

Join the Teacher Education Office and the Office of Indigenous Education in the Neville Scarfe foyer to view National Day of Truth and Reconciliation resources.

Engage with Indigenous knowledge keepers, educational leaders, and resources to enhance your understanding and knowledge of practices that advance reconciliation in the places where you live, learn, and work.

This massive open online course (MOOC) will help you envision how Indigenous histories, perspectives, worldviews, and approaches to learning can be made part of the work we do in classrooms, organizations, communities, and our everyday experiences in ways that are thoughtful and respectful. In this course, reconciliation emphasizes changing institutional structures, practices, and policies, as well as personal and professional ideologies to create environments that are committed to strengthening our relationships with Indigenous peoples.

Source: Where are the Children buried, by Dr. Scott Hamilton, Lakehead University
Over 140 years of operation at over 150 Indian Residential School (IRS) locations, Truth and Reconciliation Commission of Canada research indicates that at least 3,213 children are reported to have died. This is a conservative estimate.

While some graves and cemeteries associated with the residential schools are known and are still maintained, others are now unknown or incompletely documented in the literature and may have passed from local memory.

The Department of Indian Affairs was universally reluctant to send deceased students home for burial. In her memoirs, Eleanor Brass recalled how the body of a boy, who hung himself at the File Hills IRS (Saskatchewan) in the early twentieth century, was buried on the Peepeekisis Reserve even though his parents lived on the Carlyle Reserve.

In 1938, a mother requested that the body of her son, who was dying of tubercular meningitis at the Spanish IRS, be sent to her in Cornwall, Ontario, for burial upon his death. The response from Indian Affairs to the school was: “I have to point out that it is not the practice of the Department to send bodies of Indians by rail excepting under very exceptional circumstances. Bodies so shipped have to be properly prepared by the undertakers for transshipments under the laws of the province, and the expense of a long journey such as this would be, would entail an expenditure which the Department does not feel warranted in authorizing.”

In some cases, former Indian Residential Schools lie isolated from any surrounding community, and the available information suggests that they lie abandoned and largely overlooked.

This website contains subject matter that may be disturbing to some visitors, especially to Survivors of the residential school system. Please call the crisis line if you or someone you know is triggered while reading the content of this website, or experiencing pain or distress as a result of their residential school experience.