The Honourable Yonah Martin was appointed by Prime Minister Stephen Harper in 2009. She is the first Canadian of Korean descent to serve in the Senate of Canada and the first Korean-Canadian parliamentarian in Canadian history.

Martin received a Bachelor of Education in 1987 from the University of British Columbia; and had a 21-year teaching career in Abbotsford, Burnaby and Coquitlam school districts (1987-2008). She earned a Master of Education in Curriculum and Instruction in 1996.

Born in Seoul, South Korea, Martin immigrated to Canada in 1972. In 2003, she co-founded the C3 Korean Canadian Society, a non-profit community organization that works to bridge the Korean and Canadian communities by providing cultural, educational and volunteer resources. She also served on the boards of Vancouver Korean Canadian Scholarship Foundation, National Unification Advisory Council, the Multicultural Advisory Council of British Columbia among others.

Since 2013, Martin has served as Deputy Leader of the Government in the Senate, a role she assumed after two years as the Deputy Government Whip. In addition, Martin is active on several inter-parliamentary committees, co-chairing the Canada-Korea Inter-Parliamentary Friendship Group and serving as vice-chair of Canada Bulgaria, and director of Canada Philippines, Canada Pakistan and Canada Taiwan. She is honorary patron of C3, HMCS Haida Association and Historica Dominion’s The Memory Project: Stories of the Korean War, and Vancouver International Bhangra Celebration. Since 2010, she has served on the Advisory Board of the UBC Sauder School of Business’s Executive Mentorship Program

In recognition of her community service in the Tri-Cities region, Martin was awarded the 2004 Spirit of Community Award for Cultural Harmony. She was also awarded the Order of Civil Merit Moran Medal in 2009 by the president of the Republic of Korea for her work in advancing the rights of overseas Koreans. In 2012, Martin received the Queen Elizabeth II Diamond Jubilee Medal awarded by Governor General David Johnston. 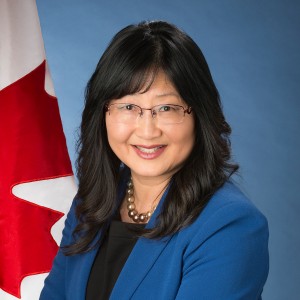