In honour of the valued work and contributions of the UBC Faculty of Education Alumni, biographies and interviews with our illustrious alumni will be released between 2019 & 2020. 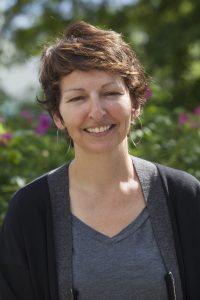 Dr. Sharon Hobenshield’s (EdD) ancestry is Gitxsan First Nation on her Mother’s side and Austrian-Canadian on her Dad’s.  She works at Vancouver Island University as the Director of the Office of Aboriginal Education and Engagement.  Sharon completed her Doctor of Education degree at UBC in Policy and Educational Leadership in 2016. Her research focused on the values and traditions embedded in the Indigenous practice of gift giving and how this tradition can inform the work of Indigenization in post-secondary education. 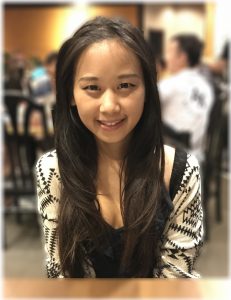 Mugi Masaki is a Secondary French Teacher at H.J. Cambie Secondary School in Richmond, British Columbia. She completed her Bachelor of Arts (French and Mathematics), her Bachelor of Education (Secondary French) and her Teaching English as a Second Language (TESL) certificate at the University of British Columbia. Since then, she has taught Core French, French Immersion and ELL at both the Elementary and Secondary levels. She has also founded and coached multiple high school cheerleading teams, including the Cambie Cheerleading Team who were named Provincial Champions in 2019.

According to her mother, being a teacher has always been Mugi’s calling; from a very early age, her passion has been caring for children. However, her desire to pursue this career was also a result of her experiences growing up as a second generation Japanese immigrant in a predominantly caucasian community. Discrimination and low self esteem were a part of her every day life, and she knew that she wanted to help students navigate these challenges. Her greatest goal as a teacher is to provide a safe and caring space for each student, and build an inclusive community of empathetic individuals. 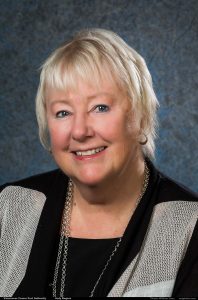 Judy Rogers joined the Vancouver Fraser Port Authority board of directors in December 2017 and was named chair in August 2018. She operates her own consulting firm, advising private, public and Crown corporations in government affairs and communications. She held the role of city manager of the City of Vancouver from 1999 to 2008. Ms. Rogers is past chair of the B.C. Assessment Authority, the B.C. Housing Commission and the UBC Alumni Association. She is past president of the Institute of Public Administration of Canada and served on the board for the Vancouver Organizing Committee for the 2010 Olympic and Paralympic Winter Games. She received the Order of Canada in 2017 and is the recipient of two United Nations public service awards. She has a Bachelor of Rec Education in Physical Education from UBC. She has a Master’s degree in public administration from the University of Victoria and a honourary doctorate (LLD) from Capilano University. 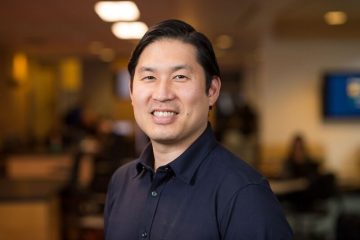 Rob’s current role as Career Strategist allows him to build belonging through identity development and career education. Rob, a Gallup Certified Strengths coach, has facilitated over 35 on-campus workshops to 400 students and staff to improve their process of self-reflection. Recognizing the challenges facing students in a world of digital distraction and social media comparison, Rob worked with faculty to use the classroom as an equalizer to deliver career education using a strengths-based approach. This led to a collaboration last year with the Faculty of Land and Food Systems, where Rob taught a series of career educational supports in four different courses, reaching over 900 students. Rob is grateful for the communities he has belonged to at UBC and feels fortunate to continue to create belonging for others at a larger scale. Rob belongs to an ice hockey team of 17 years, while his heart belongs to his extended family, his wife, Dr. Mina Kim and their two children.

The Honourable Yonah Martin is a Conservative Senator of British Columbia, appointed by The Right Honourable Stephen Harper in 2009. She is the first Parliamentarian of Korean descent in Canadian history. Currently, she is the Deputy Leader of the Opposition in the Senate (since 2015); and previously served as Deputy Leader of the Government (2013-2015) She is also Co-Chair of Canada Korea Inter-parliamentary Friendship Group (since 2009), founding Co-Chair of Canada Bulgaria (since 2014); and active on a number of other bilateral and multilateral groups. In 2013, her Senate Public Bill (S-213) received Royal Assent to designate July 27 annually as “Korean War Veterans Day” in Canada. Passionate about mentoring youth and young adults, she established a Parliamentary Internship and Mentoring Program (since 2011); she also supports various youth and young adult initiatives, and speaks to students in schools and forums across the country. Born in Seoul, Korea, Yonah Martin immigrated to Canada in 1972, and has resided in Metro-Vancouver ever since. She has earned a BEd’ 87 and a MEd’ 96, and had a 21-year teaching career (1987-2008) until her appointment to the Senate in 2009. She has been married to Doug Martin for almost 30 years, and they are proud parents of a daughter, Kiana Mi-Sun, who is also a graduate of UBC, BSc’ 17. 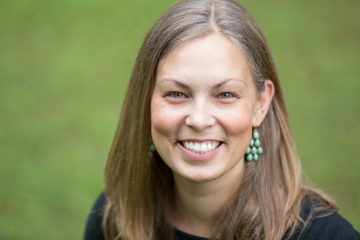 Trina Isakson supports non-profit executives with bold and future-oriented projects. Through research, facilitation, strategy, and process design, she helps leaders answer important questions and helps organizations move forward in changing times. Her clients include local, regional, and national non-profit organizations, as well as government and higher education departments that serve community. She has taught a variety of university courses on community development and non-profit leadership and management, and is founder of the Quiet Change maker Project. Trina’s formal education includes an MBA in community economic development from Cape Breton University, Bachelors of Education and Science from UBC, and a Certificate in Dialogue and Civic Engagement from SFU. Trina designs her days to prioritize time in the garden and in the mountains. She grew up in Salmon Arm BC and, after a long stint in Vancouver, lives on Tla’amin territory in Powell River. 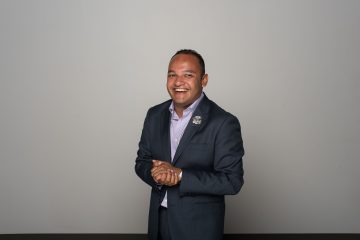 Darran’s career in education spans three different Canadian post-secondary institutions and is currently the University Registrar at York University in Toronto, ON.  He is a professional coach (ICF Certified) and educator who spent the last 11 years in Vancouver in various roles at the University of British Columbia.  Most recently, he has dedicated his career to enhancing the experience for students in the core administrative areas of the institution – the Registrar’s Office – believing that building a strong and positive foundation allows co-curricular services and academic development to build from a place of positivism.

His work in the sector ranges from service on the boards of UBC, the BC Council on Admissions and Transfer (BCCAT) and the Canadian Association of College and University Student Services.  He’s currently pursuing his Educational Doctorate from Western University.  When he has free time he curls, runs and is busy exploring his new city with his lab-mix dog, Lex, in Toronto. 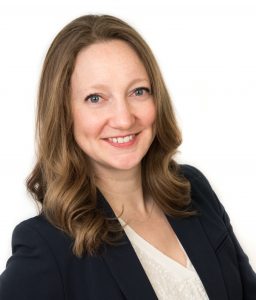 Brooke Moore believes that every child can cross the stage with dignity, purpose, curiosity and options. In all of her work across different roles, this belief takes shape as a core professional focus and motivator. After graduating with her Bachelor of Education from UBC, for which she received the UBC Dean of Education Scholarship, Brooke taught English in a West Vancouver high school for just under a decade before moving into the role of vice principal at an elementary school. In 2015, Brooke moved to Delta, where she is currently enjoying her role as the district principal of inquiry and innovation. Due to her mindset of “what if?” and “let’s try”, Brooke has enjoyed writing a couple of inquiry-focused resources for Rubicon Publishing as well as blogging for Education Canada, where she also served a year-long stint as a columnist. Currently, she exercises her love for writing in her role as editor of the Transformative Educational Leadership Journal hosted by UBC. Since her first year of teaching, Brooke has been an active member of the Networks of Inquiry and Indigenous Education. She credits the Network for introducing her to a collaborative professional inquiry, a practice she has made a central theory of action in her work. 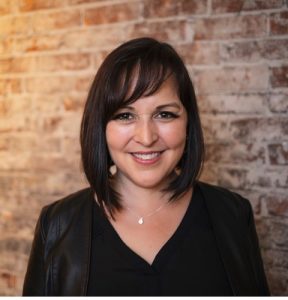 Carolyn Roberts uses her voice to support Indigenous resurgence through education. She is a Coast Salish woman belonging to the Squamish Nation her birth mother is from N’Quatqua Nation and her birth father is from Tzeachten Nation. Carolyn is an Indigenous academic who holds two degrees from UBC: a Master of Education in educational administration and leadership and a Bachelor of Education.  She also holds a bachelor’s degree in jazz studies from Capilano University. She has been an educator and administrator for over 20 years and is currently a faculty member in the Department of Education at Simon Fraser University. 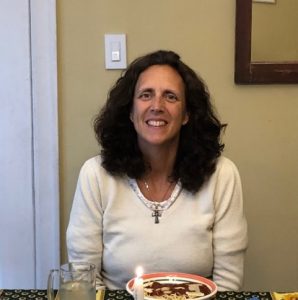 Darrell Thomas is the fine arts dance teacher and economics teacher for the Richmond Virtual School, the online secondary school for the Richmond School District. She started this online dance program for the Richmond School District three years ago, and it has grown exponentially to the extent that it is now a half-time position. She began this program to give students flexibility in their learning, and realized very early on that there are multiple ways of earning graduation credits, including ways that are not restricted to taking courses in a brick-and-mortar building. She is passionate about promoting individualized learning, as emphasized in the new BC educational curriculum. This is exemplified by her commitment to helping her dance students receive fine arts graduation credits. The students, who all dance a minimum of 100 hours per year, take her online dance courses in conjunction with their studio dance requirements. She has also taught an Economics 12 hybrid course, which was partially online with a weekly face-to-face component. The hybrid nature of the course helped prepare her students for future university requirements, especially as online integration with education continues to grow. Specialized, flexible, and individualized learning are pillars for the new BC educational curriculum, and Darrell’s fine arts dance program incorporates all of these factors for the ever-changing educational landscape for the teens of today and tomorrow.